On Friday, 10 September at 5.00 pm, during the Festivaletteratura in Mantua, the Third Edition of the Jèma International Photographic Award will close at the deconsecrated Church of Santa Maria della Vittoria.

A very special moment, long awaited for many: here are the names of the winners. Starting with the multifaceted and histrionic writer and theatrical performer Andrea Scanzi, who this year won the “Personality of culture, journalism and entertainment” Award. Among the reasons for the recognition, “his commitment to promoting journalistic and cultural dissemination through a style that well combines traditional means of communication with the language of social media”.

In the Master section stands a suggestive tribute to the imperishable aura of Lucio Fontana, signed by the photographer Michele Gregolin, “Homage to Lucio Fontana”. The author of the winning work of the Professionals Section Award will have the right to exhibit his photograph in a privileged position in the exhibition itinerary, will be the guest of Gerardo Cesari in the Lake Garda area for a weekend, together with a companion, you will receive 3 liters bottle of Amarone with a plaque.

In the Open section, two works represent the icons of elegance and the third almost shows us a new path: the face of mystical and religious elegance. Three names on the podium: Claudio Orlandi, “Elegance of birth”, Sossio Mormile “Sculpted in the air” and Eliseo Seggiorato, “Mystical elegance.” The winner of the Open section will receive 3 liters of Amarone with plate and his photo will participate in the final exhibition together with the photos of the Professionals section. The second and third classified will also see the participation of their photo in the final exhibition of the Professionals section. In addition, a magnum bottle of Jèma will be given to each one.

Also this year the Editorial Mentions promoted by the Aliberti publishing house were awarded: Cesare Barillà – “The elegance of a female body”, Lorenzo Linthout, “Elegance”, Juan Miguel Ortuño Martinez, “The jump”. These are the three works that can become cover images of future editorial publications.

The exhibition of the winning photographs will be open to the public from 8 to 12 September, from 12.00 to 19.00. Please note that to access the Festivaletteratura venues it will be necessary to have a Green Pass. 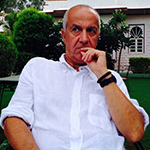 1. Claudio Marra (presidente)
Claudio Marra, professor of History of Photography at the University of Bologna, is the author of various texts that constitute a point of reference in the sector: from The ideas of photography, 2001 to In the shadows of a dream, 2004, from The infidel image, 2006, to Photography and painting in the twentieth century (and beyond), 2012, from Photography and visual arts, 2014 to What is photography, 2017.
In these books, he has addressed both historical issues, analyzing the relationships between photography and the visual arts or those with specific sectors such as fashion, and theoretical aspects related to the identity of the medium and the problems raised by the transition from the analogue to the digital system.

2. Cristina Bowerman
Chef Cristina Bowerman, the only female chef with 1 Michelin star in Rome, was born in Cerignola a small town in Puglia, Italy. After starting her career in Law, she decided to move to San Francisco to continue his law studies. While there, in order to learn “American like an American” she worked in a number of different positions and her first contact to the kitchen happened at a place called started Higher Grounds, a renown coffee house in SF.
Then she started to work for a company called Spectrum Foods which owned 16 high end restaurants almost all Italian. She moved to Southern California where she lived for a while and then to the city she loves, Austin TX. It is really in Austin that she finally discovered her love for cooking and decided to become a professional. She did in fact enrolled and graduated with the maximum score at TXCA obtaining a liberal art degree.
Her first experience with the high-end cuisine is under the Chef David Bull, James Beard award and well-renown chef. Then she decided she needed to create her own style and make it as personal as possible. That is why she moved to Rome. She wanted to know more about her roots but her idea was to go back, after experiencing the Convivio Troiani a Michelin star restaurant in Rome, and open her own restaurant in Austin.
In the short period of time she was in Rome, she got offered many opportunities and Glass Hostaria in Trastevere was the one she felt in love with. Glass had opened just a little less a year before.
Glass is a contemporary and innovative space both in philosophy and in the gastronomic proposal.
The restaurant is counter-current with the Trastevere scene, exactly like Cristina’s cuisine. Her kitchen style is the result of experiences, travels, meetings, culinary training and studies, always been the primary source of inspiration. Cristina's cuisine is a cultural crossing that tells about taste through the constant dialogue between traditions, cultures, memory and places.
Michelin star since 2010, and “Tre forchette - Gambero Rosso” since 2020, she is a case study of Bocconi Universit. She wrote her first book in 2014, “Da Cerignola a San Francisco e ritorno la mia vita di chef contro corrente” Mondadori and her second one in 2019 “the Chef meets the Artist” published by Maretti Editore. Both books underline the strong her strong personality. Cristina’s commitments are notorious and tackle several fronts, starting with training and teaching. One of the projects that is most important to her is "Adopt a Hotel Institute", within the #fareformazione, the Memorandum of Understanding aimed at improving and expanding the training offered in Hotellerie and Management schools. This project has been signed by Cristina as President of the Italian Association “Ambasciatori del Gusto”, one of the most renown Association in Italy representing the restaurant business of which Cristina is one of the founding members and President since 2016.
Her commitment as “Ambasciatore del Gusto” was born in 2015 when she was appointed Chef Ambassador of Expo Milano 2015. There, together with Paolo Marchi and Cesare Battisti, she had the chance to imagine an association like ADG (Ambasciatori del Gusto).
In 2018 she was part of the Technical Coordination Committee for the Year of Italian Food and more recently she joined Chef Manifesto, the initiative launched by Paul Newnham, which aims to end hunger, achieve security food and promote sustainable agriculture by 2030.
Cristina has always tried to represent a role model for women in the professional world which privileges male representation, undervaluing female skills and professionality. This role gained her the position of speaker at TEDxMilano Women and then again at TedXaubg. Tedx public talks highlight the "ideas that deserve to be lived". Her role in promoting and defending female role in society gained her several awards and recognition among which Ambassador by the Telefono Rosa Association, Aila Award, "Woman Chef of the Year" by Identità Golose, "Best Female Italian Chef in Europe" by Love Italian Life, “Galvanina Award for Best Chef” or her recent“FIC award for excellence” and many others.
Whitin his most heartfelt commitments toward women, she had the pleasure of being the protagonist of the biggest ACTION AID campaign in 2015 and she is between the few founders of the Fiorano For Kids organization, for the therapeutic role’s research of specific diets in the care of infantile epilepsy.
In February 2021 She took part in the Davos Agenda of the World Economic Forum in a talk by "La Stampa" in which she stressed the importance of food sustainability, the enhancement of local producers and product logistics.
Cristina creativity in the kitchen, her commitments in various areas and her capability of speaking in three different languages give her the opportunity to travel around the world to hold workshops and talks or cooking in important venues for several vip personalities, constantly enriching her (by her definition dated back now to over 13 years ago) “cucina contaminata”, that is contaminated (by other cultures) cuisine.
Because like she says “if we could overlap all food cultures of the world like sheets of paper, we will see that one small corner always overlaps. That is the point of connection and continuity and that is the corner I always look for.”

3. Alessandra Piubello
Journalist and writer from Verona, professional taster, she is the editor-in-chief of some periodicals. She is co-editor of the Gold Guide I Vini di Veronelli (the only female journalist in Italy to cover this role) and author for the guide I Ristoranti d’Italia de L’Espresso. He collaborates with the most important national and international magazines in the sector. He has published some books. She is a member of prestigious national and international sector associations and a constant presence in the most important wine competitions over the world.

4. Michael Housewright
Michael D Housewright is one of the leading photographers and video producers in the Wine and Spirits Industry. His work is regularly featured in top-tier publications like Wine Enthusiast and for many prestigious producers. With over twenty years tasting and selling fine wine Michael has a creative insight into the vision of his clients that few other photographers can express. To Michael, the wine is just as important as the imagery and vice versa. Michael spends many weeks a year traveling the wine world. He has been traveling to Italy for almost 30 years and has visited every region in the country.

5. Francesco Aliberti
Francesco Aliberti, Ms. in Italian Studies at Alma Mater Studiorum University of Bologna with Ezio Raimondi, have founded the publishing house Aliberti editore which, during Turin’s Book Fair 2011 in the occasion of an exposition organized by Gian Arturo Ferrari to mark the 150th anniversary of the book, has been regarded to as one of the most characteristic publishing houses of more recent Italian history (the list included other fifteen publishers such as Baldini Castoldi, Dalai, Chiarelettere, E/O, Minimum Fax, Newton Compton, Nottetempo, Piemme).
Since 2009 is a business partner of Il Fatto Quotidiano, guided by Marco Travaglio, and in 2011 founds with Vauro, Vincino and Cinzia Monteverdi the same publishing society in order to reintroduce the magazine Il Male. In 2013 founds the new publishing house Wingsbert House, which combines the passion for books and wines, proposing a package that holds both a book and a bottle of Italian red Lambrusco produced by the family business. In 2015 establishes Compagnia editoriale Aliberti, the new publishing brand.
Although, his real passion is balsamic vinegar. Since 2008 holds the property of a truly traditional “acetaia”, that produces a special balsamic vinegar named “lunatico”.

6. Viviana Nella Stagni
She was born in Milan but she is Veronese by adoption: at first she had an hospitality training in Alto Adige, then she obtained a Master's Degree in Educational Research in Verona. She attended AIS Courses and those of A.I.B.E.S in Milan, in 1995. Since 2003 she has worked for different realities, as responsible for communication and implementation of cultural events. She arrives in Cesari about 6 years ago, start developing the whole part dedicated to hospitality, to winery tasting and to events. Three languages, good nose, critical eye and a great passion for wine, of course Cesari (but not only!). 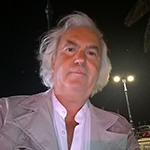 6. Angelo Falmi
was born in Piacenza and since 2000 he teaches at the Brera Academy in Milan. He paints, organizes, puts artists in contact and creates international and national events. He loves beauty and good wine that combines diversity, if really exist!
﻿